On June 1, 2015 supporters held demonstrations at Mexican consulates in cities across the United States in an effort to raise awareness of Nestora Salgado’s imprisonment. Photos and details about the events in San Diego, Seattle, San Francisco, New York City, and Chicago follow.
END_OF_DOCUMENT_TOKEN_TO_BE_REPLACED

Coordinated protests were held on August 21 in International cities. 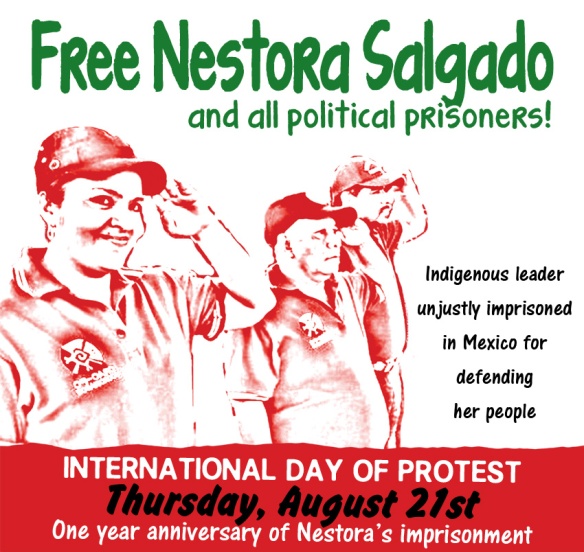 August 21, 2014 will be the one year anniversary of Nestora’s arrest and imprisonment. For 12 months, she has been denied the right to see her lawyers. Orders to free her by a federal judge have been ignored. Kept in isolation without medical attention, she represents hundreds of people in self defense groups who have been jailed for defending their communities against powerful, politically connected criminal cartels.

In June, the Mexican government expanded its occupation and repression in Michoacán, arresting Dr. José Mireles and nearly 100 of his followers. They were on their way to regain public control of Lázaro Cárdenas port, the largest seaport in Mexico, from a drug cartel known as the Knights Templar. This criminal syndicate used the port to export goods and resources stolen from the people of the region. Today Nestora Salgado and Dr. José Mireles are powerful symbols of popular resistance against Mexican government corruption and unbridled crime. As U.S. military aid to Mexico increases, the violence continues.

August 21 will be a day of International protest calling for the release of Nestora, Dr. Mireles, and all political prisoners. Join a location near you in international solidarity!