Please enjoy our welcome home video for Nestora Salgado! And don’t forget that the fight is ongoing: there are many political prisoners still in Mexico who desperately need our support!

Jailed Mexican activist Nestora Salgado has yet to see freedom two and a half years since she was arrested amid organizing a community police force in the violence-ridden state of Guerrero, but she was far from alone Sunday as family members and supporters gathered outside the prison to celebrate the community leader’s birthday and continue demanding her release.

The United Nation’s Working Group on Arbitrary Detention in Geneva, Switzerland has ruled that Nestora’s arrest and detention are illegal! International pressure for her release is escalating. (See article below.)

Tell U.S. Secretary of State John Kerry to call on the Mexican government to release U.S. citizen and political prisoner Nestora Salgado before her birthday on Feb. 28!

The U.S. Campaign to Free Nestora is collaborating with Jornada por Nestora to mobilize supporters nationwide. Tweet, call and email repeatedly demanding that Nestora not spend a third birthday behind bars.

Learn more about the U.S. Campaign to Free Nestora and make a donation at FreeNestora.org and friend our Facebook page.

Fueled by a recent United Nations human rights panel decision, supporters of Nestora Salgado, the Renton woman jailed in Mexico after organizing a community police force, are pressing members of Congress and other U.S. officials to take action on Salgado’s case.

While the ruling isn’t binding, according to a story in the Associated Press, hersupporters said in a press conference on Monday night that they hoped it would build support for Salgado from United States officials, including Secretary of State John Kerry, to pressure Mexico to release the naturalized U.S. citizen. 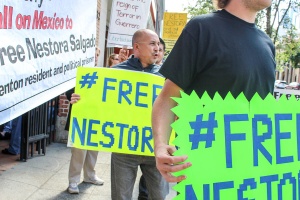 Salgado returned to her hometown of Olinala, Mexico and took a leadership position in a community police force to address the growing level of crime, until she was arrested on charges of kidnapping. The arrest took place after the group arrested a town official on suspicion of theft. Salgado’s supporters say the community police force was sanctioned by the state, and that her arrest is politically motivated.

According to local newspaper Proceso, six witnesses against Salgado failed to appear in court to testify on the state charges against earlier this month.

“They didn’t show up and she cannot defend herself,” said Alejandra Gonza, a professor at the University of Washington School of Law who is helping Salgado with her case.

“She feels kind of angry. The state government (of Guerrero) says, ‘We have these victims.’ But when it comes time for court, nobody shows up,” Avila said.

“If you’re a victim, don’t you want to tell your story to the judge?” he said.

But while the absence of witnesses might get a case dismissed in the United States, the judge in Salgado’s case postponed the hearing, said co-counsel Thomas Antkowiak, a professor at the Seattle University School of Law. Salgado’s next court date is scheduled for Aug. 31.

“She hasn’t been convicted of anything — this is all pre-trial and she’s been in detention for two years,” Antkowiak said. 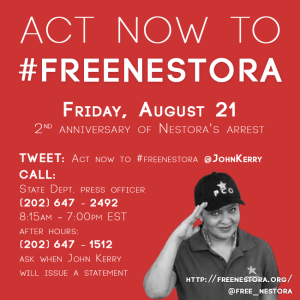 Ask when John Kerry will issue a statement regarding Nestora’s incarceration.

Actions are also planned in several U.S. cities, including Aug. 21 rallies at Mexican Consulates in Los Angeles at 5 PM, San Diego at 7 AM and Seattle at 11 AM, plus a week-long series of events in Chicago where Nestora’s daughter, Grisel Rodriguez, will be speaking.

Solidarity actions are also planned in Mexico City and a large march will be held in Chilpancingo, the capital of Guerrero.