Fred Hyde stands with the many pages of signatures provided in support of Nestora.

Members and supporters of the Libertad para Nestora/Freedom for Nestora – U.S. Committee gathered over 1200 signatures on a petition to Mexican President Enrique Peña Nieto that states:

”We demand the immediate release of Nestora Salgado, Dr. José Luis Mireles, Marco Antonio Suástegui, Gonzalo Molina and Arturo Compos and all the political prisoners from indigenous community self defense forces in Guerrero and the autodefensas in Michoacán as well as other social activists imprisoned and denied their right to due  process under your administration.”

Shown with the petitions is Fred Hyde, who wrote the cover letter shown below on behalf of the campaign.

I am writing on behalf of Libertad para Nestora Salgado-U.S. Campaign. Twice in the last year, we have hand-delivered letters to Mexican consulates in five U.S. cities addressed to you personally regarding the incarceration of Nestora Salgado. We have never received a response. This shows an appalling lack of concern on your part for someone unjustly imprisoned under your watch. We are not alone in our views.

With this letter are petitions signed by over 1200 people in the U.S. demanding the immediate release of Ms. Salgado, Dr. José Luis Mireles, Marco Antonio Suástegui, Gonzalo Molina, Arturo Campos and the many other political prisoners who were leaders and members of indigenous community police forces and autodefensas. They are being held on trumped up charges and without any due process of law under dangerous conditions in high security prisons.

On September 22, 2014 you spoke to the United Nations World Conference of Indigenous People, touting Mexico’s record on indigenous rights. Your remarks are nothing more than empty rhetoric as long as you continue to lock up Salgado and others for their political views and activities.

The recent disappearance and probable massacre of so many young and innocent students in Guerrero by the police in collusion with drug gangs and corrupt state and local officials is the poisonous fruit borne of years of state repression, discrimination and racism.

Ultimately, you and other government officials are responsible for these deaths and many others. International condemnation of your administration is growing worldwide. The only way out of the situation is to free all political prisoners – jailed for promoting many of the social justice values the young, disappeared teacher trainees held dear – and oversee the arrest and prosecution of their assassins and persecutors. 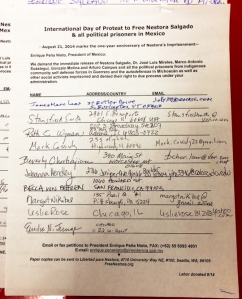 Detail view of the petition 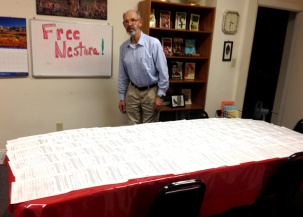