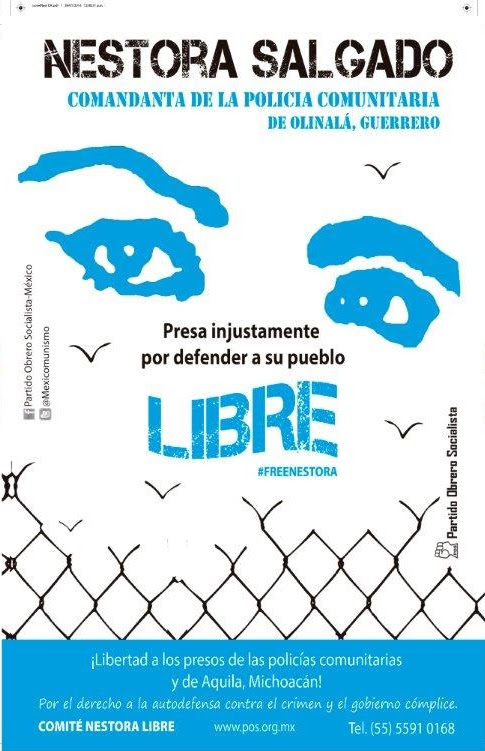 On March 7, the Mexico City Committee to Free Nestora will hold a press conference at which Nestora’s sister, Clotilde Salgado will speak. It will be broadcast live at 10:00am Mexico City time from the portal CENCOS (www.cencos.wordpress.com). It will be followed by a public forum at the National Autonomous University of Mexico (UNAM) and by a demonstration supported by a number of unions that have endorsed the campaign. They will all address the case of Nestora, and the plight of the community police in Guerrero and in Michoacán.The Mexican National Human Rights Commission has dispatched a team of investigators to look into the circumstances of Nestora’s arrest and incarceration to determine if they violate her civil and political rights. More on this when additional facts are available.

It has been six months since Nestora Salgado, a U.S. citizen and resident of Renton, Washington, was abducted from her hometown of Olinalá, Mexico and transported to a federal maximum security prison hundreds of miles away. She remains imprisoned today on trumped up charges related to her role as the elected leader of the indigenous police force in Olinalá, a force which defended the community against violent drug cartels and corrupt officials. Six months of inaction on her behalf by the U.S. government has resulted in grave hardship and deprivation for her and her family.

As her imprisonment and the arrest of other community police continues, the international campaign to free Nestora and her comrades is growing. Thus far it has encompassed a hunger strike by her husband Jose; an online petition campaign that has over 6300 signers; endorsements by over 120 organizations and prominent individuals; legal petitions filed with the U.N. and the Inter-American Commission on Human Rights; and a multi-city, multinational day of protest and picketing on International Human Rights Day, December 10. Protests took place at Mexican consulates in five U.S. cities and government offices in Mexico, the Dominican Republic and Costa Rica. There were also other actions in Australia, France and Argentina. Dozens of TV and radio interviews, as well as numerous newspaper articles in the U.S. and Mexico, have covered Nestora’s plight and the campaign to free her. Univision, the largest Spanish language TV network in the U.S., produced a short news report on her story.

Carrying out this campaign has entailed considerable expense for picket signs, photos, banners, informational flyers and transportation. Donations are urgently needed and gladly accepted to expand this campaign, please see below for more on how to make a donation. A shout out goes to the Frente de Resistencia por México which held a successful fundraising event in Los Angeles on February 22.

The Freedom for Nestora organizing committee and her family are keeping up a pressure campaign on members of the Washington State congressional delegation. As of yet, they have not acted on our request to urge Secretary of State John Kerry to intervene on Nestora’s behalf. Instead they have tried working through the U.S. consulate in Guadalajara with minimal results. Only after numerous visits by consulate staff was Nestora allowed to receive, but not make, international phone calls with her family. Additionally, after months of letting Nestora see only her sister, one of her daughters has recently been allowed visits. That and clean drinking water are all that the U.S. intervention have produced. 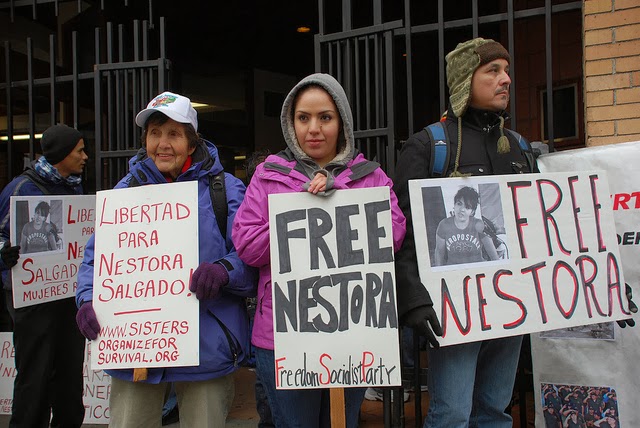 Prison officials continue to deny Nestora medical attention and the drugs needed to control the pain she suffers due to neuropathy. She is still barred from daily exercise (part of the treatment for her condition) and is restricted to her cell for all but an hour a week. Not surprisingly, she has lost considerable weight. Her sense of isolation is intensified by prison rules that forbid her contact with other inmates, even her cellmate.

The failure of Nestora’s congressional representatives and the U.S. State Department to aggressively intervene to free her has made her situation more difficult. Their lack of action has given a green light to increasingly punitive and exaggerated charges being brought against her by Mexican prosecutors. Six counts of kidnapping suddenly became 50 counts; coordinating legitimate community policing activities is now called leading a “criminal conspiracy”; and allowing community police officers to lawfully arm themselves with single shot rifles and machetes has become “weapons trafficking”.

Forcing Nestora to expend a great deal of the time and money to answer all these bogus charges is part of the Mexican government’s strategy to drain Nestora’s limited resources. Just getting copies of the files related to the plethora of charges against her will cost hundreds of dollars. This is on top of the heavy expenses involved in traveling hundreds of miles to and from the prison to visit Nestora.

Clearly federal and state prosecutors have been sabotaging Nestora’s right to effective legal representation. Government representatives have interfered not only with her right to see an attorney, but also with her choice of attorneys. The court refused to recognize her original lawyer who worked for a well-respected human rights organization and who had experience representing political prisoners. This delay tactic led the family in Guerrero to hire another attorney out of desperation. Unfortunately, he did not have the requisite qualifications to take on a political case like this. Only recently they secured a highly qualified law firm in Mexico City to represent her. But as of this writing–and six months after her arrest–she has still not seen an attorney.

Exciting news on the organizing front in Mexico

On January 17, a demonstration in the capital city of Guerrero demanded Nestora’s release along with other indigenous political prisoners. The Freedom for Nestora campaign issued a statement of solidarity that was widely publicized in the press in Mexico,including the two major newspapers in Guerrero. Two weeks later, on February 2, Nestora’s daughter Sayra spoke before a thousand supporters in Mexico City with the help of Partido Obrero Socialista (POS).

Other solidarity actions included a campaign kicked off by POS to produce and put up 2000 posters to raise public awareness of the case in Mexico. POS members were also instrumental in getting teachers in Oaxaca who belong to the Coordinadora Nacional de Trabajadores de la Educación (CNTE) to endorse the solidarity campaign.

Labor and people of color organizations in the U.S. call for Nestora’s release

The Freedom for Nestora-Seattle campaign was highly visible at the January march and rally in Seattle commemorating the life of Martin Luther King, Jr. King County Council Member Larry Gossett promoted the campaign and invited Nestora’s husband Jose Avila and her daughter Grisel Rodriguez to address the crowd of several thousand. The MLK Day Celebration Committee also passed a resolution calling on the Congressional Black Caucus to urge the State Department to take immediate action to secure Nestora’s release from custody.

Nestora’s campaign will be featured prominently in International Women’s Day events not only in Mexico City but in New York City, where members of YoSoy132, Nueva York will be on a panel on March 15. In Seattle, members of Nestora’s family will be speak at the annual celebration on March 14. On March 23 Nestora’s case will be one of several examples of repression against women leaders and activists discussed as part of a Bay Area IWD tribute.

As we learn of other events, we will let you know. ¡La lucha continua!

If you haven’t already, now is the time to sign the online Free Nestora Campaign Facebook page to volunteer and to check for new developments, meetings and activities.

This report was prepared by members of the Freedom for Nestora Committee– Seattle, Washington, U.S. Su Docekal, Coordinator
FreeNestora.Seattle@gmail.com
206-953-5601